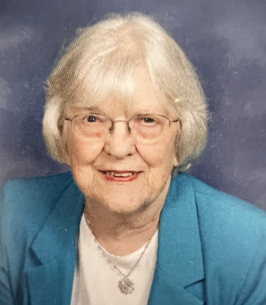 Rosemary Demaree McCurry, age 101, died peacefully in her home at Wesley Commons, Greenwood, South Carolina on Sunday, August 21, 2022 surrounded by her two sons and their wives.

Born on a farm in Franklin, Indiana, Rosemary lived a long and good life. She was a member and relative of founding families of the Hopewell Presbyterian Church and surrounding historic Hopewell community. Her mother died when she was just 5 years old. Her father’s sister, Mary “Aunt Mamie” Demaree, came to live with them and helped raise Rosemary and her younger sister Judy.

A 1938 graduate of Alva Neal High School in Franklin, Indiana, she attended Hanover College, graduating in 1942 with a BA degree. Her father passed away in 1941 while she was in college. She taught social studies and English and was the school librarian at Union Township High School in Valparaiso, Indiana 1943-1947. Rosemary then pursued a BSc degree in library service from Columbia University in New York City and graduated in 1948.

Shortly after, she took a position with the Armed Services Civilian Corps at Camp Stoneman in Pittsburg, California working in the library where she met Joe McCurry. They were married in 1953. Joe’s career with the US Department of Public Health began in San Diego, followed by a posting in Charleston, South Carolina where sons Michael and David were born in 1954 and 1957 respectively.

Their life together took the family to Pittsburg, PA, Lansing, MI, Deerfield, IL, and then to Redwood City, CA. After retirement from his career with the US Public Health Service and CDC, Joe and Rosemary moved back to Joe’s hometown of Abbeville, SC where they resided from 1992 until Joe’s passing in 2012. In Abbeville, Rosemary was an active and much loved member of Abbeville Presbyterian Church and volunteered as a docent at the Burt-Stark Mansion and Abbeville Library where she used her training and skills in librarianship. Rosemary moved to Wesley Commons continuous living community immediately after Joe’s passing in 2012.

The family will receive friends 10:00AM - 11:00AM, Saturday, August, 27, 2022 in the Abbeville Presbyterian Church. Funeral services will begin at 11:30AM in the church sanctuary. There will be a private burial in Melrose Cemetery.