To share your memory on the wall of Raymond Medbury, sign in using one of the following options:

Mr. Medbury attended the Bentley School of Accounting and Finance in Boston (now Bentley University in Waltham, MA) and graduated in 1956. He then entered the United States Navy, where he trained as an Electronics Technician. During his Navy career, Mr. Medbury served in the White House Communications Agency from 1968 to 1978 where he traveled extensively throughout the United Sates and the world in support of four Presidents, five Vice Presidents and other dignitaries. In February of 1972, he spent 30 days in Peking, the capital of the Peoples Republic of China, supporting President Richard Nixon’s historic trip to reopen relations with that nation. After his retirement from the Navy, Mr. Medbury and his family moved to Lake Anna, VA where he built a home and became a Realtor. In 1986, he became the broker/owner of Lakeside Realty, and then retired for a second time in 1999. At that time, Mr. Medbury and his wife built a new home on Lake Keowee, which they occupied until moving to Wesley Commons in Greenwood.

He is survived by his wife of 61 years, Joan Cheney Medbury, formerly of Phillipston, MA and a daughter, Karen L. Medbury, of Atlanta, GA.

Mr. Medbury will be interred next to his parents in Green Bower Cemetery in Gardner, MA.

In lieu of flowers, the family respectfully requests memorials, in memory of Mr. Medbury, are sent to the USS Slater DE766 Destroyer Escort Historical Museum, PO Box 1926, Albany, NY 12201 or by visiting https://ussslater.org/donate .

A message of condolence may be sent to the family by visiting www.harrisfuneral.com .

To send flowers to the family or plant a tree in memory of Raymond Clifford Medbury, please visit our Heartfelt Sympathies Store.

Receive notifications about information and event scheduling for Raymond

There are no events scheduled. You can still show your support by sending flowers directly to the family, or planting a memorial tree in memory of Raymond Clifford Medbury.
Visit the Heartfelt Sympathies Store

We encourage you to share your most beloved memories of Raymond here, so that the family and other loved ones can always see it. You can upload cherished photographs, or share your favorite stories, and can even comment on those shared by others.

Posted Oct 31, 2020 at 12:00am
Dear Joan and Karen,  So sorry to hear of the passing of my school classmatel  He was always  such a genteman and we will all miss him. He and Ken used to like to talk over their fishing times.  Jane and Ken Mccauley of Hubbardston
Comment Share
Share via: 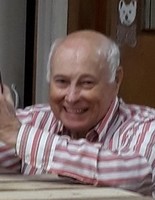