To share your memory on the wall of Jerry Alewine, sign in using one of the following options:

Your condolence has been submitted for approval. There may be a delay before posting.

Print
Jerry Thomas Alewine, 76, of the Level Land Community in Due West, died Thursday, December 24, 2020 at his home. He was born in Abbeville to the late Roy Chalmas Alewine and Addie Lee Wilson Alewine.

A 1963 graduate of Dixie High School,... Read More
Jerry Thomas Alewine, 76, of the Level Land Community in Due West, died Thursday, December 24, 2020 at his home. He was born in Abbeville to the late Roy Chalmas Alewine and Addie Lee Wilson Alewine.

A 1963 graduate of Dixie High School, Jerry was self-employed as a contractor for 40 years with Services Unlimited. He honorably served his country in the United States Army. His commitment to the Armed Forces continued throughout his life proudly devoting his time to the VFW and American Legion. Jerry was a member of New Prospect Baptist Church in Laurens where he enjoyed his time as a greeter.

In addition to his parents, he was preceded in death by a brother, Ben Alewine.

A private graveside service with military honors will be held.

To send flowers to the family or plant a tree in memory of Jerry T. Alewine, please visit our Heartfelt Sympathies Store.

Receive notifications about information and event scheduling for Jerry

There are no events scheduled. You can still show your support by sending flowers directly to the family, or planting a memorial tree in memory of Jerry T. Alewine.
Visit the Heartfelt Sympathies Store

We encourage you to share your most beloved memories of Jerry here, so that the family and other loved ones can always see it. You can upload cherished photographs, or share your favorite stories, and can even comment on those shared by others.

Posted Dec 31, 2020 at 02:28pm
We are so sorry to hear about this. Jerry was such a wonderful neighbor. He would help out in any way he could, if there was a need. He thoroughly enjoyed remodeling the home place...had his plans ready and always ready to improve the place. He loved all of his animals...and that little ole stud pony was special!! At night, when he couldn't sleep, he would walk around outside checking his animals and making sure all was well. Jerry was such a wonderful neighbor...he watched our farm numerous times when we had to be out of town and took excellent care of our animals. I know the Level Land community will miss Jerry!!!
Comment Share
Share via: 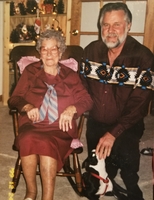