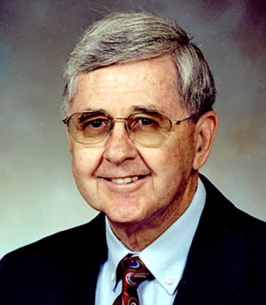 A memorial service will be held Sunday, September 12, 2021 at 3:00PM in the Due West ARP Church. The family will greet friends after the service on the lawn at Erskine College Moffatt Dining Hall. The services for Dr. Randall Tucker Ruble will be live-streamed and may be viewed at www.facebook.com/duewest.arp

Dr. Ruble was born on April 15, 1932, the fourth of five children of William C. and Carrie Conner Ruble. He grew up in Lexington, VA, and graduated high school near Philadelphia.

Upon graduation from high school, Dr. Ruble enlisted in the U.S. Air Force, serving in the Korean Conflict. He moved to South Carolina to attend Erskine College on the GI Bill, and graduated with honors in three years. Upon graduation, he then earned Master’s degrees from Erskine and Princeton Theological seminaries, and in 1964, the Doctor of Philosophy degree from The University of Edinburgh, Scotland.

He returned in 1965 to begin a long and productive career as an educator at Erskine College and Seminary. He did post-doctoral studies at Harvard University and the ATS Institute for Theological Management at West Point.

Dr. Ruble taught at Erskine for 45 years, first as a professor of Old Testament and Hebrew, later as Dean of the Seminary, and finally as president from 2006-2010. He was named President Emeritus upon retirement. Throughout his tenure, he focused on students, faculty, staff, and alumni. He developed a reputation for encouraging all but especially those who, like him, were first-generation college attendees from modest upbringing. While in college, Dr. Ruble was welcomed into professors’ homes because he had nowhere to go on holidays. He, in turn, regularly welcomed students in the Ruble home for holiday meals.

Dr. Ruble served in many ways. As a minister, he was ordained in 1961, and pastored Abbeville and Mount Carmel ARP churches from 1967 to 2010, with a brief three-year break to serve as chaplain at Erskine College. He preached across the ARP denomination during his career and served as moderator of the ARP Synod, chair of the Presbyterian Council on Chaplains and Military Personnel, and president of the Association of Seminary Presidents of the National Association of Presbyterian and Reformed Churches. He served as chair of many accreditation committees for the Southern Association of Colleges and Universities and the Association of Theological Schools. As a major contribution to the church, he edited the Bicentennial History of the ARP Church.

Above all, Dr. Ruble loved family and friends. He organized family reunions for the Ruble family in Lexington, VA, and annual beach trips to Isle of Palms. He took his family camping across the U.S. and Canada, and traveled extensively with family in retirement.

He was an accomplished runner and loved all sports, but especially Erskine Athletics. He regularly welcomed Erskine sports teams to his home and those teams, in turn, adopted him as their favorite fan.

In addition to his parents, he is predeceased by two brothers, Bill and Ben, and a sister, Marjorie.

He is survived by his wife of 62 years, Martha Grant (Molly), two sons, John (Holly) of Orlando, FL, Jeffrey (Cathy) of Columbia, a daughter, Ellen (Mike) of Tucson, AZ, and a brother, Richard (Anne), of Siloam Springs, AR. Grandchildren are Grant and Carter Ruble, Meghan Hall and her husband Trevor Hall, Tucker Ruble, and Flannery and Liam Lindeman. Great-grandchildren are Owen and twins Mary Oliver and George Hall.