To share your memory on the wall of Douglas \"Doug\" Londo, sign in using one of the following options:

Doug proudly served his country in the United States Army. Following his service in the Army, Doug and his family moved to their beloved Mayfair Community in Canton, MI where he was employed with NY Life for many years as a health insurance agent, later founding Alliance Benefits, LLC and serving as president and CEO. Doug’s hobbies included sailing, listening to music, including Jimmy Buffett, and reading historical non-fiction works. He was a passionate Michigan State fan, loving all things MSU and where he met his wife to be, Karen. Doug had a fond affection for dogs; throughout the years rescuing many golden retrievers.

A private family service will be held at a later date.

Memorial contributions, in memory of Doug, may be sent to the Humane Society of McCormick County, Inc., PO Box 900, McCormick, SC 29835.

To send flowers to the family or plant a tree in memory of Douglas "Doug" Wayne Londo, please visit our Heartfelt Sympathies Store.

Receive notifications about information and event scheduling for Douglas "Doug"

There are no events scheduled. You can still show your support by sending flowers directly to the family, or planting a memorial tree in memory of Douglas "Doug" Wayne Londo.
Visit the Heartfelt Sympathies Store

We encourage you to share your most beloved memories of Douglas "Doug" here, so that the family and other loved ones can always see it. You can upload cherished photographs, or share your favorite stories, and can even comment on those shared by others.

Posted Feb 15, 2021 at 03:53pm
I was so sorry to learn of Doug's passing, and would like to express my deepest sympathies to family and friends. I had the absolute pleasure of working with Doug over the past few years as his Broker contact for Humana. I always looked forward to our conversations, and knew from the start that we'd eventually drift away from our business discussion and talk about hobbies and swap stories about living up North. I will miss him - Robert Gailunas.
Comment Share
Share via:
T

Posted Jan 29, 2021 at 05:41am
To Karen and Family,
We will always remember Doug as our friendly neighbor who really wanted to (not needed to) help us with our insurance needs. My Mom moved into his former clients home, and he was very concerned that she was taken care of in this department, especially since she came from another state. He'd pull up to her house or catch me at my store (with Sophie) , to make sure I was doing my "Homework" to get me better health insurance. He always make sure we had his custom calendar/planner and his business pen. God bless Doug, we will meet again!
We pray for your comfort, take care!
Moses, Tracy, Carol (Mom) and family
Comment Share
Share via: 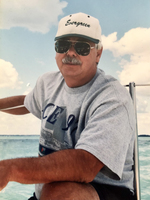