To share your memory on the wall of Alexander Jackson, sign in using one of the following options:

A graduate of Florida State University, Alexander was employed in international affairs with the United States government and other private sectors. He enjoyed the outdoors and spending time on the water, whether it was fishing or boating. An enthusiastic sports fan, Alexander could often be found watching NCAA football and cheering on the Atlanta Braves. He was a member of Hendricks Avenue Baptist Church in Jacksonville, FL. Alexander will be fondly remembered for his fun-loving personality and will be dearly missed by all who had the pleasure of knowing him.

He is survived by his children, Reid Jackson and Lauren Jackson, both of California; his mother, Lynne, of Ninety Six, SC, formerly of Savannah, GA; his father, Ronald, of Nevada, formerly of New Orleans, LA; a brother, Scott Jackson (Jenny) of Abbeville County, SC; and a nephew, Thomas Jackson (Katy) and niece, Ellen Byrd (Benjamin), all of Greenville, SC.

The family extends their heartfelt appreciation to the staff of Hospice and Palliative Care of the Piedmont. Their loving care and compassion during Alexander’s final days were a comfort to his family.

In lieu of flowers, memorial contributions, in memory of Alexander, may be sent to Hospice and Palliative Care of the Piedmont, 408 W. Alexander Ave., Greenwood, SC 29646.

To send flowers to the family or plant a tree in memory of Alexander Conway Jackson, please visit our Heartfelt Sympathies Store.

Receive notifications about information and event scheduling for Alexander

There are no events scheduled. You can still show your support by sending flowers directly to the family, or planting a memorial tree in memory of Alexander Conway Jackson.
Visit the Heartfelt Sympathies Store

We encourage you to share your most beloved memories of Alexander here, so that the family and other loved ones can always see it. You can upload cherished photographs, or share your favorite stories, and can even comment on those shared by others.

Posted Apr 20, 2021 at 09:07am
Alex was such a nice guy. We went to Delaware County Christian School together. My heart breaks for your family. I will be praying for you all in the coming weeks and months ahead.
Comment Share
Share via:
PC

Posted Apr 17, 2021 at 04:18pm
The cutest ring bearer ever! I remember Alex as such a cute little boy in our wedding. Our yearly visits together at Tybee with my mom and dad, his mom, and his kids, were always so much fun.We were so happy when he moved to Savannah, so that we could visit more often. I don't think we will ever again watch a Braves game without thinking of him! We are so saddened by his passing but happy to know he is pain free and in the loving arms of Jesus. Sending hugs and prayers to all of the family! We love you!
Bill and Patty 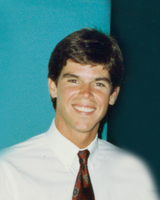